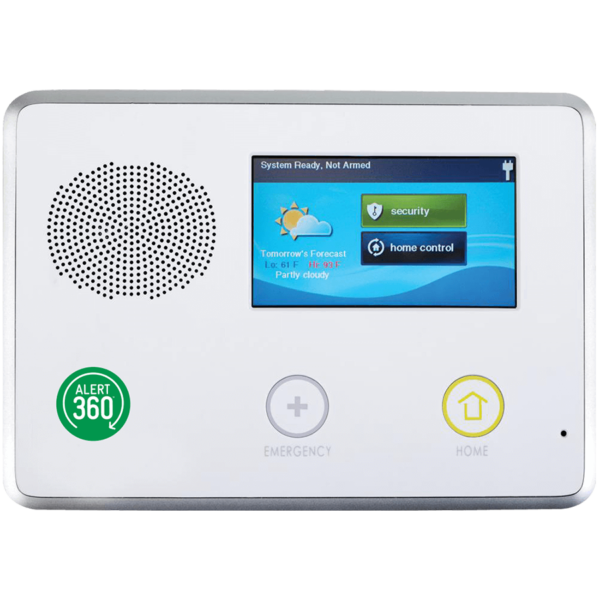 Information on Alert 360’s Wireless Security Control Panels:
A wireless home alarm system is the choice made by almost all new homeowners. The wireless home security systems have greatly increased in popularity due to the eradication of the mass of wires that a security company use to have to install. Alert 360’s wireless control panel will monitor all the details sent to it – up to 60 wireless zones. It has full voice response that will indicate system status, zone descriptions, alarms, and weather emergencies.

Additionally, the 2Gig panel is built on the Z-Wave radio platform which allows it to receive software upgrades and to add-ons such as other smart home automation products like a smart thermostat, appliances, lighting, and door/lock control.

How does the wireless home alarm system actually work?
When a sensor is tripped, say a door or window is open the sensor will send a signal to the control panel unit. On a wireless home alarm system, the signal will be sent via over the air. The Z-wave platform can go through a lot of things like walls. That makes it ideal to be installed following a home has been constructed which wasn’t pre-wired for a home security system.

Alert 360 Wireless home security systems give a homeowner better options on adding on other z-wave security and home automation products to their home with the smallest amount of mess and interruptions to their home’s walls.

The Alert 360 2Gig control panel is recommended to be installed by only a licensed security technician. There is no customer support for unlicensed technicians.

How we reward our customers

Home security that moves with you

If you move, we’ll install a basic home security system at your new home, free of charge. If your new home already has a home alarm system, we’ll waive our connection fee. Details and conditions apply.
Learn More

Up to $1,360 in deductible reimbursement

If you suffer a loss due to a home break-in or fire, we will reimburse your paid homeowners insurance deductible up to $1,360. Details and conditions apply.
Learn More

Get rewarded for your satisfaction

Our referral program helps keep your family and friends safe and connected plus rewards you with free monitoring.
Learn More

Let us give you a custom quote